How To Perform Hajj- Step by Step guide

Millions of Muslims throughout the globe gather in Mecca to perform hajj, each year in the twelfth month of Islamic calendar, called Dhul-Hijjah. Performing Hajj is a once in a life time obligatory act for those Muslims (male or female) who have financial and physical means. Muslims from all over the world gather annually in Mecca in a display of unity, faith and solidarity by re-joining the six day ritual that the last prophet Muhammad (Peace be upon him) performed in his last Pilgrimage.

Preparing for the Hajj

Enter Ihram- Day 1The first ritual of Hajj is entering Ihram that is a pilgrim's sacred state- when crossing Miqat (outer boundaries of Mecca).

After entering Ihram, pilgrims head to Mina by foot or by buses or cars. It is around 8 Km journey. They are required to spend a whole day in Mina. Pilgrims spend time there in praying and remembering Allah Almighty.

The day at Arafat- Day 2The day of Arafat is known as one of the most poignant day not especially in Hajj but also of the Islamic Luner Calendar. The prophet Muhammad (Peace and blessings of Allah be upon him) gave his final sermon at Mount Mercy. Pilgrims reach at Arafat after 14.4 Km journey from Mina and spent the day in prayer.

After sunset pilgrims move to Muzdalifh, 9km ahead from Arafat and spend night under the sky. 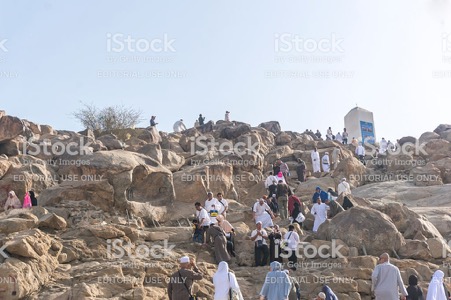 Throw pebbles at the pillars- Day 3

Third day of hajj is called Yawm-ul hajj al akbar. This is the longest and most dangerous day of hajj for all pilgrims as millions of pilgrims throw pebbles at the pillars. At the 10th Dhul-Hijjah, Muslims all over the world and in Hajj celebrate Eid al-Azha.

Pilgrims' day starts with the act of throwing seven stones at the largest pillar known as Jamarat. Before Dawn they head back to Mina. This symbolic act of stoning Satan or devil is based on the Islamic historical tradition.

After casting pebbles all pilgrims are required to perform sacrifice. Pilgrims then must slaughter a goat, sheep, camel or cow. At this time pilgrims removed their Ihrams after shaving or trimming their hair. Many pilgrims head to Mecca to do tawaf and sa'ee including circling the Kaba seven times and then running or walking between the hills of Safa and Marwa seven times.

On day 4 and 5 pilgrims again stoning at pillars and this time they throw seven pebbles at three pillars. After this act pilgrims spend next two or three days in praying and remembering Allah in Mina.

After these days they return to Mecca from Mina to perform final tawaf that is known as farewell tawaf.

Before returning home pilgrims can also visit Medina that is another holiest Islamic city, where the last prophet Hazrat Muhammad (peace and blessings of Allah be upon him) is buried along with his companions. However, visiting Medina is not the part of Hajj.